One of the things that drew me into filmmaking was that the machinery was downright fun. Now, truth be told, I’d always been drawn to tools and technology, but this particular juncture – taking complex, high-tech gadgets and using them to make art – was particularly irresistible.

So what could be better than to use high-tech gadgets to make films about other high-tech gadgets? Last week I was like a kid in a candy store, working with the talented Brad Peterson (Chief Demo Officer at Citrix Systems) to show how their enterprise software works with all the latest IT innovations to bring mobility and security to business applications. Not only did Brad show up with great toys, ranging from iPad Mini’s to convertible Windows tablet/laptops to the brand new Samsung S4 phone, but we had some sweet toys to play with too, running the Red Epic on a PeeWee dolly for great camera moves and lighting with some of Alan Steinheimer’s new LED lights. Better still we got to shoot on a private jet!

Though, as a director, my job is about generally telling stories and communicating ideas, it’s also about making things work. Sometimes it’s about software – editng and animating and tweaking stuff in Photoshop to make it look better – and other times it’s about the mechanics of how to get the results you want from the camera, the lights, or the sound equipment on a set. And of course, the people: the most important tool of all, if you want to get serious work done, is your crew – pulling from a diverse base of experience multiplies your capabilities.

And that’s what tools really are: force multipliers. I learned, back in sixth grade, how inventions like the lever, the pulley, and the screw were used by developing civilizations to expand their control over the natural world, and these same principles keep coming back around to me, and watching the grips move the dolly around last week, I remembered that the pyramid builders required another essential resource – muscle – in abundance. 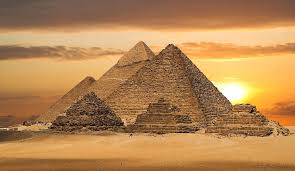 So how do you go about making stuff that lasts, like those guys did? I think the first step is to have a resoundingly solid foundation, an idea that has mass and will stand the test of time. It helps to keep it simple, to stay focused on the message, and to allow yourself to tell just one story at a time. Remember that if that first one gets enough attention, you’ll be asked to build a second one, perhaps a third and fourth…

I built Photon to be an organization that gets things done, that solves problems, and that leverages both the latest tools and the most tried-and-true techniques. Let us be your Corporate Video Production San Francisco company, and together, we’ll make marvels.